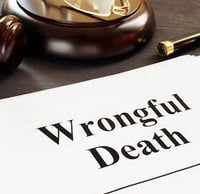 One of the biggest issues in a wrongful death lawsuit is related specifically to the types of compensation to the decedent’s estate or beneficiaries. The “legalese” term for monetary awards in a lawsuit are known as damages. Damages awarded in a wrongful death action are directly related to the death of your loved one. However, if he or she did not pass away at the scene of the accident, then the State of Illinois may agree that the estate is entitled to damages leading up to death.

These types of lawsuits are called “survival actions.” If you have questions about survival actions or wrongful death claims, don’t hesitate to reach out to a skilled attorney today.

In short, wrongful death laws permit the estate to be granted monetary damages for decedent’s beneficiaries. Survival laws authorize an award of damages to the estate that the decedent could have recuperated if he or she had not died. Let’s take a closer look at both types of damages below.

Since wrongful death claims are strictly governed by Illinois state law, there are specific remedies to address in court. These types of issues include:

A personal representative may submit a wrongful death claim on behalf of the decedent. Usually, he or she is a close relative such as a spouse, adult child, or parent named in an estate plan. However, if a will was not left or family members contest it, a judge will hear the facts and appoint a personal representative by court order.

The spouse of the deceased could receive damages for loss of companionship and services around the house performed by the decedent. Further, minor children could be awarded damages for the loss of guidance stemming from the death of their parent(s).

The estate may also be entitled to punitive damages if the responsible party acted negligently. Damages for the deceased’s funeral service and burial expenses are also included as well. In Illinois, there are no caps on the damages that a court can award.

Illinois survival laws permit damages to the estate that were incurred from the occurrence of injury until the time of death. This means that survival damages could include, not only pain and suffering, but also lost income. If, however, the departed passed away immediately as an outcome of an accident, then the estate would be entitled to pain and suffering but not for the deceased’s lost wages.

Speaking with a Wrongful Death Attorney

If a loved one has passed due to the negligence or oversight of another, speaking with a Chicago wrongful death attorney may help ease your burden while recovering maximum damages. Contact the legal team of Harvey L. Walner & Associates, LTD. at (312) 313-2888 to schedule a free consultation.